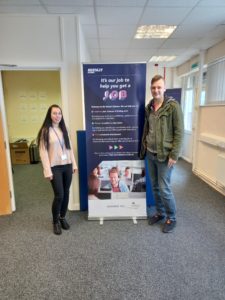 Joel Robinson, from Wakefield, was the first person to be helped back into work with the support of the newly launched Restart Scheme in West Yorkshire – just days after his initial appointment.

Joel had been unemployed for 18 months when he was referred to the Restart Scheme.

Previously a Food Production Operative, Joel was on the lookout for a part-time cleaning role and so Laura, his dedicated Employment Advisor, set to work offering Joel the support he needed.

Being out of work for over a year impacted Joel’s confidence, causing him anxiety and stress, especially at the thought of job interviews.

Laura worked with Joel to break down these barriers by providing tailored support. Laura referred Joel to online interventions and updated his CV to focus on his job goal and transferable skills.

With his new CV, Joel applied for a part-time job as a cleaner at ShawCare Cleaning Services, which is based in Wetherby.

Following a successful telephone interview, Joel attended his very first shift later that same day. Thanks to his newfound employment, Joel says he is now no longer experiencing the anxiety he felt during lockdown.

“It’s been really tough. Through lockdown I faced a lot of hard decisions, my anxiety got on top of me. I had never experienced anxiety before, and I started to get depression. My partner helped me through. I was scared about starting at ShawCare but my co-worker was lovely and my anxiety started to go. Laura helped me a lot, she is a diamond. My confidence was really low but now it is back.”

Reflecting on his journey with the Restart Scheme, Joel said he had been given a warm welcome: “It has been really helpful and easy to negotiate – a very friendly service.”

Tracey Yeoman, Contract Manager at ShawCare Cleaning Services: “Joel is a great member of the team. When I first interviewed Joel, he was very shy. I kept in contact with him every day after his first shift to make sure he was okay. Joel and his co-worker are helping each other and are good friends. Joel is an absolute breath of fresh air and he has fitted in perfectly.”