Succeeding In The Security Sector

Paul McCabe from Chesterfield has praised the Restart Scheme for supporting him to get back into work after four years of unemployment. 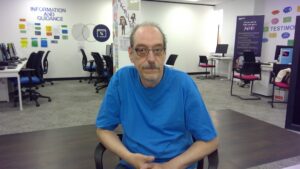 Paul, 60, joined the Restart Scheme in December 2021, having previously worked in warehouses, however he had begun to find the physicality of the role challenging.

Paul registered at the Jobcentre and was referred to Maximus’ Work and Health programme, but when the Covid pandemic hit and the ‘Stay At Home’ guidance came into play, Paul’s time on the programme was cut short. Later down the line, he was referred to the Restart Scheme by the Jobcentre.

In Derbyshire, Reed in Partnership are delivering the scheme on behalf of Maximus.

Paul was on the lookout for a job that wouldn’t be too physically demanding, and needed to update his CV and brush up on his job searching skills in order to give him the best chance at finding a role to suit him. As he relied on public transport to get around, he also needed a job with hours that would work in sync with local transport timetables.

Paul’s Employment Advisor, Nicola, built a good relationship with him, helping him to update his CV and speak to recruitment agencies.  He then attended Employment Support Training sessions and a Restart Scheme jobs fair to support in his search.

Nicola helped Paul to apply for his SIA licence, obtain Right to Work documents, his passport, and 5 years’ work history for a potential employer.

Organising all the necessary paperwork took time, and he unfortunately missed the role that he was originally aiming for. With the team’s support, he was encouraged to keep motivated about his prospects as he continued to search for work.

Recruitment Manager, Natalie, also stepped in to support Paul and referred him to a Security Officer role at another company, which he successfully secured.

To ensure he had a smooth transition into his new job, the Restart Scheme supported Paul with clothing, shoes, and a mobile phone.

Paul started his new job as a Security Officer in August, and reflected on the help he received: “I have found my time on the Restart Scheme massively beneficial. The assistance and support I have received has been really good and when I asked for any help I got it straight away. The support provided has really encouraged and pushed me along. It really helped just by having someone to talk to, and when I hit barriers, the Restart Scheme has been there to help me resolve them.

“Now I’m back in work, I feel more confident in myself and am enjoying the role. For me, the future looks a lot brighter.”