Katrina Fudge from Barnsley is celebrating being back in employment for the first time in 12 years thanks to the Restart Scheme.

Katrina joined the Restart Scheme, which is being delivered by our partners The Growth Company across South Yorkshire, in December 2021. 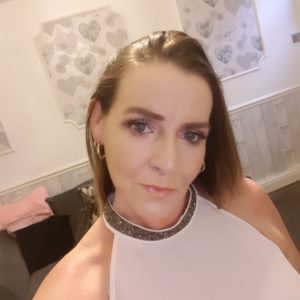 During her initial meeting with her Employment Advisor Mark, it became apparent that Katrina was looking for a part-time role, which could fit in with both her childcare commitments and her health conditions.

One barrier to employment for Katrina which was identified straight away was her right to work documentation. Katrina did not have proof of her National Insurance, which is an essential document in being able to start work.

To help Katrina to overcome this barrier, the Growth Company supported her with creating a personal tax account. Katrina was then provided with the National Insurance proof she needed, which could be used to apply for work.

After so long out of work, Katrina was nervous about the prospect of moving back into employment. During discussions about Katrina’s work history and future goals and aspirations, Katrina had expressed an interest in cleaning.

The very same month that she joined the Scheme, a vacancy was posted by a member of The Growth Company’s Employer Engagement Consultant team, for a cleaning role which was very local to Katrina. This vacancy just so happened to be based within the Restart Scheme’s new office at Churchfield Court, Barnsley.

The job was a perfect fit for Katrina, and she immediately asked to be put forward for the role. Mark passed her information on, and she was quickly invited for an interview.

Katrina needed support with buying clothing for the interview, and The Growth Company provided her with vouchers to buy suitable clothes.

Katrina’s interview was a success, and she was offered a part-time position on a permanent basis, with hours that worked perfectly for her. She started her new job in January.

During Katrina’s follow up meetings with Mark, she has told him how the job has made a genuine difference to her life.

Katrina said: “I’m loving my new job. The Restart Scheme is the best thing going. When I met with Mark, I told him about my anxiety, depression and what hours I could do around caring for my daughter. They write it all down, and they find a job that suits you. They listen to what you can and can’t do, which is really helpful. I’d recommend anybody to them. People think that finding a job is scary, but The Growth Company’s Restart Scheme team are welcoming and comforting – and they think about who they are supporting when they look for jobs for you. It’s brilliant.”